Master Chef winner Bret McGregor travels to Bangkok, where he delights in trying authentic Pad Thai, along with some of the city’s other street food. He then is taught how to make delicious pork ribs with a local twist, before returning to New Zealand to try his hand at the local market.

Master Chef winner Brett McGregor travels to Bangkok, where he delights in trying authentic Pad Thai, along with some of the city’s other street food. He then is taught how to make delicious pork ribs with a local twist, before returning to New Zealand to try his hand at the local market.

While in Thailand, he participates in the annual Loy Krathong festival, held every 12th full moon in the Thai calendar. The festival is a night of performance, lights and beauty contests to thank the Goddess of water.

A Krathong is a decorative, floating basket, and Brett makes his own from woven banana leaves and incense sticks. The idea is to place the Krathong in the river and let it float away, taking with it all your troubles and indiscretions of the previous year.

“I’m a little nervous today,” confesses Brett before he starts. “When the public’s trying your food, they’re very honest!”

Brett starts with his trusted Olivado extra virgin sesame oil. He adds about a tablespoon to a medium-hot pan, and then adds some chopped coriander roots, as well as about the same amount of garlic. “You want to keep this continuously moving in the pan,” Brett explains after adding a teaspoon of white pepper. “Although I want it to go nice and golden, I don’t want it to get burned and get bitter.” 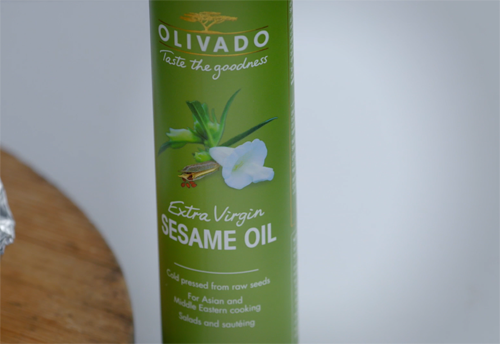 Once the roots and garlic have turned a nice golden colour, it’s time to add some fish sauce. “Beautiful, salty, fishy…. delicious!”  Then it’s two teaspoons of soy sauce, followed by 120 grams of palm sugar, which will slowly dissolve. To finish the sauce off, Brett adds about three teaspoons of oyster sauce.

Now for the ribs. Brett uses Olivado high heat cooking oil. “I want to make sure I get a really good sear on the outside of those ribs, and that’s the best oil to use,” he explains. “This oil is at about 180 degrees, and anywhere between 170 – 180 is good.”

“The reason I’m using this high heat oil is because if you use an olive oil or something like that, it actually becomes carcinogenic,” Brett says. “So, if you use an oil that is specifically designed for really high temperatures, you get a great crispy outside, and it won’t go into the centre of the meat, making it all oily.” 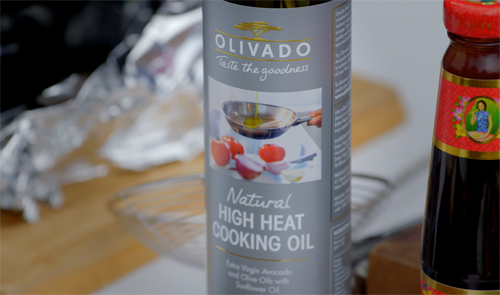 Once the palm sugar has dissolved, Brett lets the sauce cool. While that’s happening, he removes the ribs from the pan, and sets them on a paper towel to drain, whipping off any excess oil. He then dips the ribs straight into the sauce. “Be liberal, it is sweet, sticky and a little salty. The longer you leave them in, the more flavour you get into those ribs.”

To plate up, Brett stacks the ribs and adds some kimchi he’s made over the previous few days. After topping it off with some fresh coriander, the delicious Thai recipe is ready. 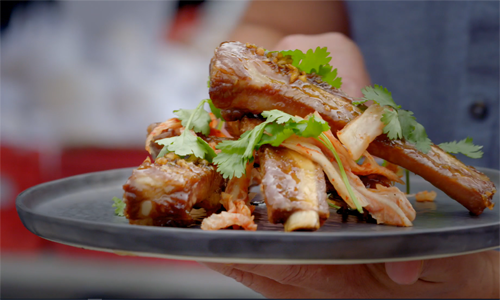 If you would like to try cooking these beautiful ribs at home, then you’re going to need some of Olivado’s high heat cooking oil. Take a look at our other products by clicking here, and if you have any questions about us or our award winning avocado oil, then please don’t hesitate to contact us today.