Brett once again heads to Hong Kong, where he learns from a dumpling master, handmakes some jewellery, and tries the best pancakes in the world, all before heading home to try his own unique recipe for kumara waffles.

Masterchef winner Brett McGregor heads to Hong Kong again, where after handmaking a ring for his wife, he returns to the kitchen to learn how to make dumplings from a local master. Brett then comes home to New Zealand and tweaks a few of the recipes to make breakfast for his wife Tracey.

“Hong Kong is many things,” Brett says. “It’s an enormous Asian financial centre, it’s one of the best places in the world to go shopping, and if you’re bringing the kids, there’s Ocean Park, Disneyland, and loads of beaches on the outer islands.”

Brett starts off with a non-food related adventure, and visits the artists quarter of Hong Kong, Soho. He meets up with Belinda, a local jewellery artist, who shows him around PMQ, a local hub for artists and designers.

At Belinda’s studio, she shows Brett how to make a custom ring from scratch. “Here’s an opportunity to earn some serious Brownie points with my wife!” 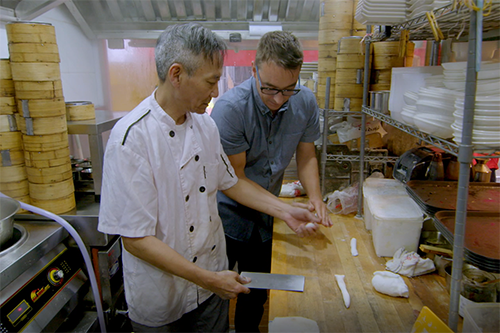 Afterwards Brett heads to a renowned local restaurant, Ding Dim, where he has an appointment with a famous dumpling master, Master Black.

“Ding Dim is known for making some of the best dumplings in town,” Brett says, “and in Hong Kong, that’s a big deal!”

Master Black agrees to show Brett some of the trade secrets, starting with the dough, but it’s not all smooth sailing for the Masterchef winner, and he finds himself on a steep learning curve.

“Master Black has literally made millions of these over the years,” Brett explains. “he makes it look so simple, that it’s very frustrating for me that I’m not getting it straight away.”

Things don’t get any easier as the lunch rush begins, but Brett manages ok in the end. “I feel a bit better about my efforts when I found at that those guys have 85 years experience between them,” Brett confesses. “My 2 hours experience kind of showed up a little.”

After all that hard work, Brett relaxes at another local Soho restaurant, Stack. The young owner Joshua, has invited Brett to try a pancake tasting session. 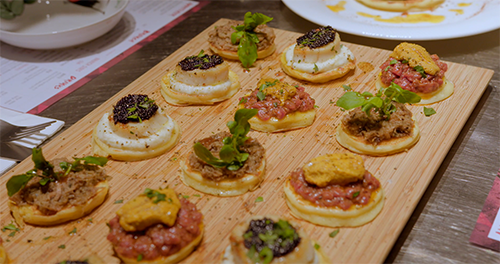 A platter of 15 small pancakes is brought out and Brett tries each and every one of them, with the highlight being a French blood sausage.

“This has been the best food so far!” Brett tells his host – no small praise indeed!

Back in New Zealand again, and Brett wants to tweak some of the recipes he tried in the pancake house.  “Wandering the back streets of Hong Kong was an amazing experience,” he says. “I think I’ve come up with something sensational, my “sweet as” kumura waffles.”

Brett first sieves the dry ingredients together. “That’s about 2 and a half cups of flour, brown sugar, some salt, baking powder, baking soda, and some ground cloves and ginger, and of course a couple of teaspoons of cinnamon.”

Once they’re mixed together, Brett sets them aside while he gets the wet ingredients together. “The reason I’m doing the dry ingredients in one bowl and wet in the other, is so I get a really nice mix when I combine the two.”

After whisking it all together until it’s nice and smooth, it’s time to add the dry ingredients to the wet. “I like to add it a little bit at a time, incorporating it gently,” Brett explains. “At this stage, you don’t want to whisk it, just bring it all together, because you don’t want to overwork the gluten in the flour. The lighter you are at this stage, the better the end result will be.”

Once the batter is ready, it’s time to add to the waffle machine, making sure it’s nice and hot before spooning the ingredients in.

While the waffles are cooking, Brett whips up a mapled sour cream to serve with them. Mixing one cup of sour cream, Brett adds 3 tablespoons of maple syrup. After removing the waffles from the machine, Brett then slices up a pear to serve on top along with a dollop of the sour cream and some pecans crushed up on the top.

“The unmistakable aroma of those delicious green tea eggs in Hong Kong has got me thinking about how I can add value to such an amazing little snack.” Brett says. “So now I’m going to show you my version of green tea eggs.” Brett starts off by pre-boiling his eggs for 10 minutes. “Once they’re hard-boiled, all you do is get a spoon and really carefully crack the outside of the egg- that’s going to allow all the flavour to get in.”

He then adds a stick of cinnamon, 3 star anise, some crushed black pepper corns and a good pinch of salt. “Then it’s time for some soy sauce. I’m using 3 tablespoons of premium soy sauce, and one tablespoon of dark soy sauce.” Brett says. “The dark soy sauce will make the egg change colour under the shell.”

After ripping open some green teabags and adding the contents, Brett then adds a few slices of orange skin before letting them simmer for 3 hours.

“While they’re cooking, let’s get on with something to serve them on.”

Brett plans to create a little “nest” to set the eggs on. To do this, he has to deep fry the little root systems at the end of a spring onion. “I’m going to use Olivado high-heat oil because it has a neutral flavour.”

After bringing Olivado’s high-heat oil to about 170 degrees, Brett adds the roots. “Watch these really carefully,” Brett warns, “they’ll cook really quickly, so you can’t go off and do something else, you have to watch the entire time.”

Brett plates up by creating a little “nest” with the fried roots, and then adding his green tea egg. If you would like to try any of these recipes, or anything in the Taste of a Traveller series, then you’ll need Olivado’s finest range of avocado oils.

Check out our products here, and if you’ve any questions, please don’t hesitate to contact us. Our friendly and helpful staff will be happy to answer any questions you may have.